A sneaky picture from inside the chamber. It wasn’t me.

TH Renter Michael James was left feeling angry and offended last night after asking TH Council’s new cabinet member for housing, Sirajul Islam, what the council can do to speed up property inspections to make use of the new law to prevent revenge evictions.

Michael’s landlord attempted to evict him three times last year after he reported dangerous conditions at the 19-apartment block he lives in and so fully appreciates the importance of the new law that came into effect in October.

However, instead of offering any assurances or asking for an explanation if he wasn’t aware of the new law, Sirajul simply repeated the answer he gave to Michael’s previous question on landlord licensing.

TH Renters are concerned that the councillor responsible for protecting private renters from callous landlords doesn’t seem to be keeping abreast of new laws aimed at doing just that.

The new law states that a private tenant cannot be evicted from his or her home for six months after the council has carried out an inspection and issued an improvement notice to the landlord following a complaint about sub-standard conditions. 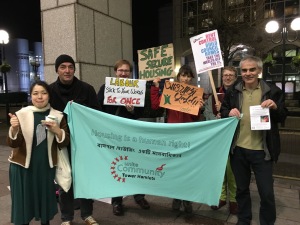 But the reality is that TH Council’s environmental health team – who carry out the inspections – is under-resourced and so they are unable to quickly respond to complaints meaning a landlord could evict a tenant who has complained before the council has inspected the property and issued an improvement notice.

Hence Michael’s question: “can the [cabinet member for housing] outline how he will speed up inspections and the issuing of improvement notices, so private renters can benefit from the new law that is supposed to prevent revenge evictions?”

The answer is clearly: “no he can’t.”

UPDATE (27/11/14): More good news – Rushanara Ali contacted us last night to say she would be voting in favour of the bill. Thanks to everyone who contacted their MPs.

UPDATE (26/11/14): Meg Hillier tonight said she would be voting in favour of the Tenancies (Reform) Bill.

This Friday MPs have the opportunity to stop private landlords from evicting tenants for requesting essential repairs to their home to make them safe.

While the Tenancies (Reform) Bill is no catch-all solution to ending retaliatory evictions it will prevent landlords from evicting tenants for six months after the request or complaint has been made, highlight the matter to the council and so, theoretically, see that the work is done.